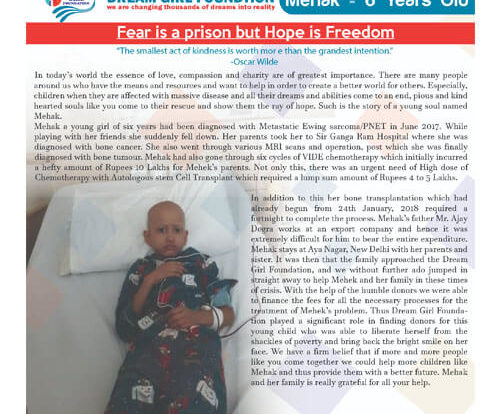 “The smallest act of kindness is worth more than the grandest intention.”

In today’s world, the essence of love, compassion and charity are of greatest importance. There are many people around us who have the means and resources and want to help in order to create a better world for others.

Especially, children when they are affected with the massive disease and all their dreams and abilities come to an end, pious and kind-hearted souls like you come to their rescue and show them the ray of hope. Such is the story of a young soul named Mehak.

Mehak a young girl of six years had been diagnosed with Metastatic Ewing sarcoma/PNET in June 2017. While playing with her friends she suddenly fell down. Her parents took her to Sir Ganga Ram Hospital where she was diagnosed with bone cancer. She also went through various MRI scans and operation post which she was finally diagnosed with a bone tumour. Mehak had also gone through six cycles of VIDE chemotherapy which initially incurred a hefty amount of Rupees 10 Lakhs for Mehek’s parents. Not only this, there was an urgent need for a High dose of Chemotherapy with Autologous Stem Cell Transplant which required a lump sum amount of Rupees 4 to 5 Lakhs. In addition to this, her bone transplantation which had already begun from 24th January 2018 required a fortnight to complete the process. Mehak’s father Mr. Ajay Dogra works at an export company and hence it was extremely difficult for him to bear the entire expenditure. Mehak stays at Aya Nagar, New Delhi with her parents and sister.

It was then that the family approached the Dream Girl Foundation, and we without further ado jumped in straight away to help Mehek and her family in these times of crisis.  With the help of the humble donors, we were able to finance the fees for all the necessary processes for the treatment of Mehek’s problem.

Thus Dream Girl Foundation played a significant role in finding donors for this young child who was able to liberate herself from the shackles of poverty and bring back the bright smile on her face. We have a firm belief that if more and more people like you come together we could help more children like Mehak and thus provide them with a better future. Mehak and her family is really grateful for all your help.

Keep spreading smiles and embrace the lives of the ones in need!

“We can do no great things, only small things with great love.” 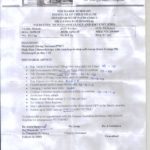 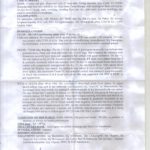 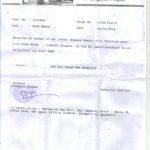 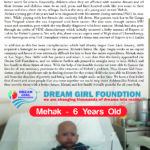 Video Based on Our Project